The idea behind this project is to provide a base platform that can be used in different visual monitoring activities. First, it was needed in a birdhouse project where a birdhouse should be monitored over an extended period.

Here are the goals that we try to hit with this project: 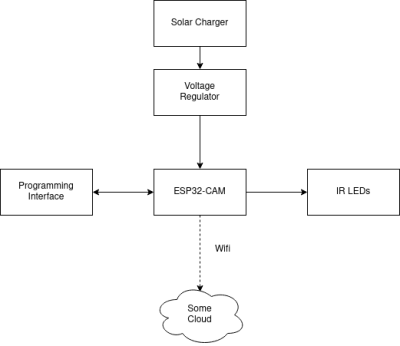 As a base platform, the known-working ESP32-Cam was chosen. But shortly after making the first prototype based on it, a couple of flaws were discovered. The prototype had a PCB which allowed plugging in multiple daughter boards together to make one complete system. Furthermore, it also included some IR LEDs to enable night vision. The main problem was the ESP32-CAM board itself. It works okay on its own, but it is harder to implement in another system. For example, we had to desolder the onboard flash led because it was not needed and consumed way too much power. Also was it hard to program the board because of the programming buttons which were located on the wrong side of the PCB. So there was more soldering and hacking involved than what should be needed. In the end, the prototype worked but we knew that we had to improve upon that.

Besides the hardware, a small NodeJS Server was developed which was able to get images from the ESP32 and save it on a server.

The second prototype is currently a work in progress.

The main idea with this one is to combine the known working features of the first prototype on one single PCB. Because most of the used components have open-source schematics, these could be used as a base for the new custom PCB. So all the blocks got rebuilt on a new PCB. Only the voltage regulation part was built from scratch with newer components. Here you can see the end result:

Unfortunately, the board currently has two flaws. First of all the footprint for the solar charge controller is wrong. So the board was first not even able to power on. With bridging two pins at least the USB-power part could be restored for further testing. This has to be changed in a second version. The bigger flaw is the following: The board can be programmed (at a lower speed than usual) but the code is never executed. Further investigations have to be done.

After starting the development of the second prototype we also started working on an open-source platform to view all the photos gathered by deployed versions of the hardware. In general, the software is built so other authenticated devices could upload photos as well.