Nitrogen is an essential element for plant growth, consequently, the fertilization based on it is correlated with crop yields. A lack of knowledge about the current condition of the nitrogen content of the soil may lead farmers to apply large amounts of nitrogen fertilizer with the intention to obtain higher yields of good quality, which seems to be reasonable from an economic point of view as the cost of fertilizer is very small compared to the impact of a low yield; but it does not seem to be a good idea at all from an ecological point of view since this practice brings with it as possible consequence surface- and groundwater pollution, due to nitrate leaching into the soil. Potential health risks for humans and animals are led by high nitrate concentrations in vegetables and in drinking water, as pointed out by Andreas Möller et al. (2003, p. 4).

Soil samples are usually carried out by external services or farmers, while soil nitrate content analysis is usually carried out ex-situ in a laboratory. Mineralization of soil samples is a particular problem when they are not properly cooled during storage and shipping, which can lead to erroneous values in the analysis result. On the other hand, if the samples are frozen, thawing can substantially increase the nitrate content, producing incorrect information on the condition of the soil (Esala, 1994). Also, the need to send soil samples to a laboratory means that the farmer may have to wait for several days to receive the results. 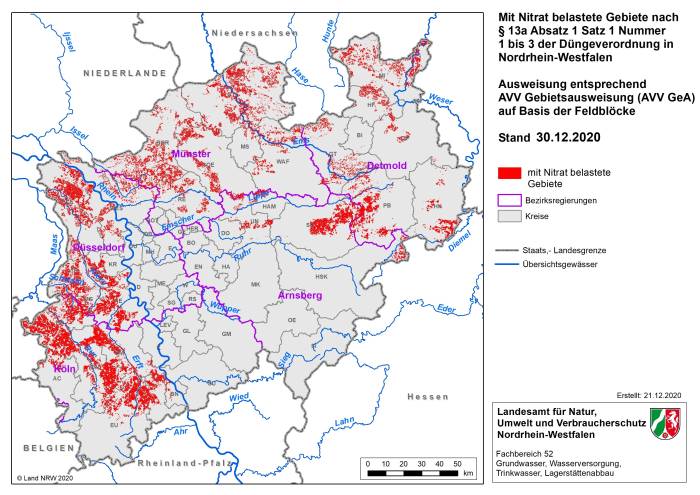 The Landesamt für Natur, Umwelt und Verbraucherschutz Nordrhein-Westfalen – State Agency for Nature, Environment and Consumer Protection North Rhine-Westphalia – (LANUV NRW) determined the areas polluted with nitrate implementing the methodological specifications according to AVV GeA (§§ 4-10) in that region of Germany. During the study it has been found relevant the measuring points influenced by agriculture, which showed an excess or an increasing nitrate trend within an observation period 2009-2018. The Figure above shows a result map with the areas polluted by nitrate.

The purpose of this project is the development of the prototype of an automated soil sampler and solution mixer machine that prepares the soil for a later soil nitrate content analysis in-situ; consisting of two main mechanisms:

i) A soil sampling mechanism, which is able to: a) take samples from a depth of 1 to 2 feet to suit different crops, and b) collect the sample for the next step.

ii) A solution mixer mechanism, which: a) adds an extractant to the soil sample, b) has a water container c) mixes the solution so that it is prepared for a further nitrate content analysis, and d) disposes of the solution and rinse the container, which is necessary after each analysis so as not to interfere with the measurement of the next one. The most commonly used extractant is water, but may be different according to the nitrate test applied; then if the extractant is other than water, a container for it is needed.

A completely automated system for nitrate content analysis in-situ can provide the farmer with quicker and more accurate results (based on the avoidance of the problems associated with the traditional ex-situ process). Since the mechanism covers until the mixture of the soil solution, it gives the possibility of using different nitrate tests, such as the widely known strips or ion-selective electrodes. This machine has its own platform on which it is mounted, then it can be carried by any vehicle through the field. A data analysis system would be part of the nitrate test system itself.

A test has been made to check the behavior of a drill to get familiar with the process and consider it for machine structure requirements. Soil type: Clayey 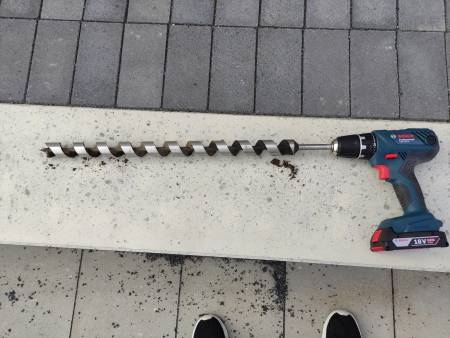 The first time, I got to drill 30cm depth. 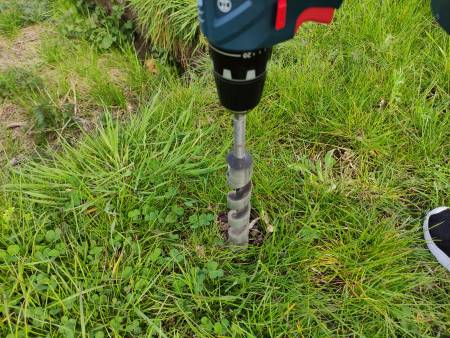 The second time, I got to drill 50cm, which is the total length of the bit. 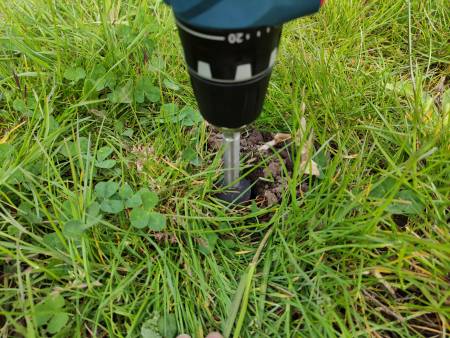 During this test, it was remarkable that [with this amount of torque and these soil conditions] it is not possible to take a soil sample by drilling more than 30 centimeters deep in one go, separating the total depth on multiple phases would be a good an alternative to increasing torque in this case.

It is made of two parts: (i) a vertical motion sub-mechanism that is going to move the (ii) drilling mechanism which basically consists of a tool to drill down the soil. 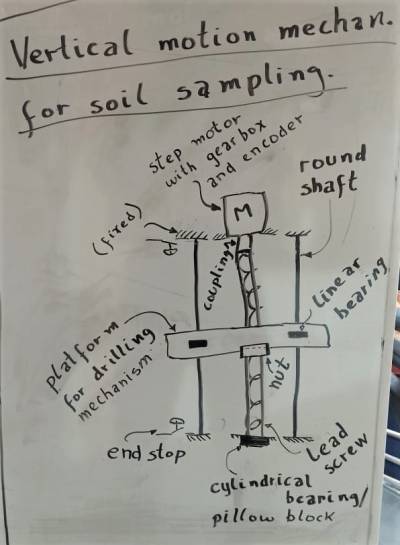 By checking other projects I had the idea of not doing it on a specific rover (the FarmRobot as it was exposed the last time), but doing it on a separated frame exclusive for it, that way it can be carried by any vehicle, whether the FarmRobot, the Summit (the one at the GreenFabLab), also a tractor; I think it will also be better in terms of the stability of the needed water container.

I also add this draft describing the parts that will be part of the Up-Down sub-mechanism for the soil sampling mechanism.

Rovers available at the Hochschule Rhein-wall to develop or test the mechanism:

The Summit-XL, is a commercial Autonomous Mobile Robot (AMR) designed to operate indoor and outdoor. 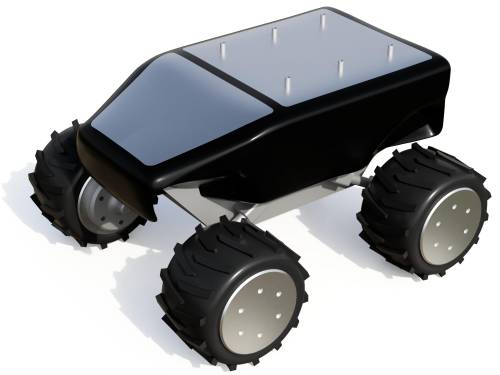 Developed in the FabLab_HSRW-KaLi, the Farm Robot is an open-source robot for weed control in arable and vegetable growing, as well as for use on meadows in nature reserves. 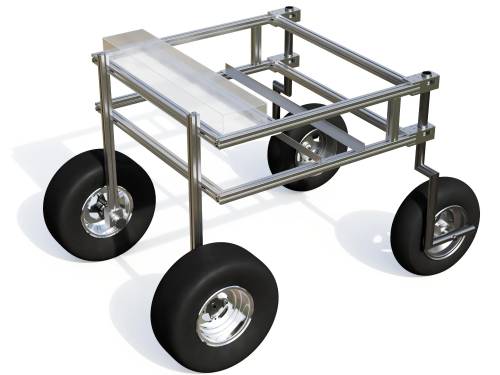 Taking advantage of Digital fabrication technologies, 3D printed pieces are being used to evaluate aspects to improve regarding sizes, stability, and performance.

A foundation idea for a possible future project: